The goal of this project is to create a mobile phone application which maps the R0 value –at country to neighborhood level- and predicts for each user’s itinerary their impact on this R0 value. The R0 value indicates the rate of spreading of a virus in a certain region-it’s spreading when R0>1 and decaying when R0<1. Currently this value is estimated based on i.e. hospital admissions, which is a delayed figure compared with the actual spreading of the virus. The app is tailored for the general population of a country and issued by public institutions.

a)  Use the geolocation of user’s phones to harvest their position information for statistical use. The users need to input their age when logging into the app (it’s the only required information). The harvested data allow the reconstruction of the people encountered by the users in a day, which would raise awareness in the population about the effects of going out. Moreover, in order to minimize the delay in the estimation of the R0 value, we propose a method where the data gathered by application help forecast the R0 value. The spreading of a virus, R0, mainly depends on the location of individuals and the itinerary with respect to each other, asides from hygiene and social distancing. According to simulations R0 is highly influenced by individuals traveling from one community.
In practice this application records the location of each user, via GPS, with which it predicts the R0 value place specific-from country to neighborhood scale. This data can be used to indicate high risk location, i.e. places which has overly been populated for the last three days. Furthermore, this value is person depended as they belong to different communities/districts. The same data can be used by authorities, i.e.to gain an idea of the value R0. This information is to get an indication if extra measure needs to be applied locally. The user and/or authorities would only get information about the statistics, no personal info of individuals. User can further input his/her “hygiene level ” to further improve the estimation accuracy on R0. Ideally the phone/app should be able to indicate the level of “social distancing”, perhaps via the Wifi/hotspot.

b)  Inform the population about the nature of the disease, about contingency measures taken to control the spread of the disease and about the current infection and death rate on the national territory. The goal is to have an official and reliable source of information to help fight the surge of fake news about the pandemic.

c)  Coordinate volunteering efforts for domestic supplies. Even in situations of confinement and social distancing, it has been shown [1] that the presence of highly frequented central hubs (supermarkets, pharmacies, post offices) reduce the efficacy of confinement measures. The application would allow people to register as “volunteers” or “beneficiary”, sharing their availabilities, respectively their list of needs. The application would be able to assign volunteers to requests or people in close proximity, and the payment of the shopping will be processed automatically once the products are delivered (think about apps like Uber of Lyft). If volunteers are working part-time (because of the pandemic) or are unemployed, they would be able to request a document certifying their work in order to get a compensation for their time by the government. This measure will allow to reduce the pool of people accessing the central hubs, therefore helping to reduce the infection rate.

As the development of this app will require a sizeable time availability and team, the present work will focus on the development of a statistical model for the estimation of the actual R0 based on geolocation data provided by the users.

Next steps for the R0 estimator

The implementation of the R0 estimation algorithm into a smart phone application.

To entertain the 4 billion people stuck at home, we are going to organize a one-of-a-kind music festival to raise funds for COVID-19 relief. 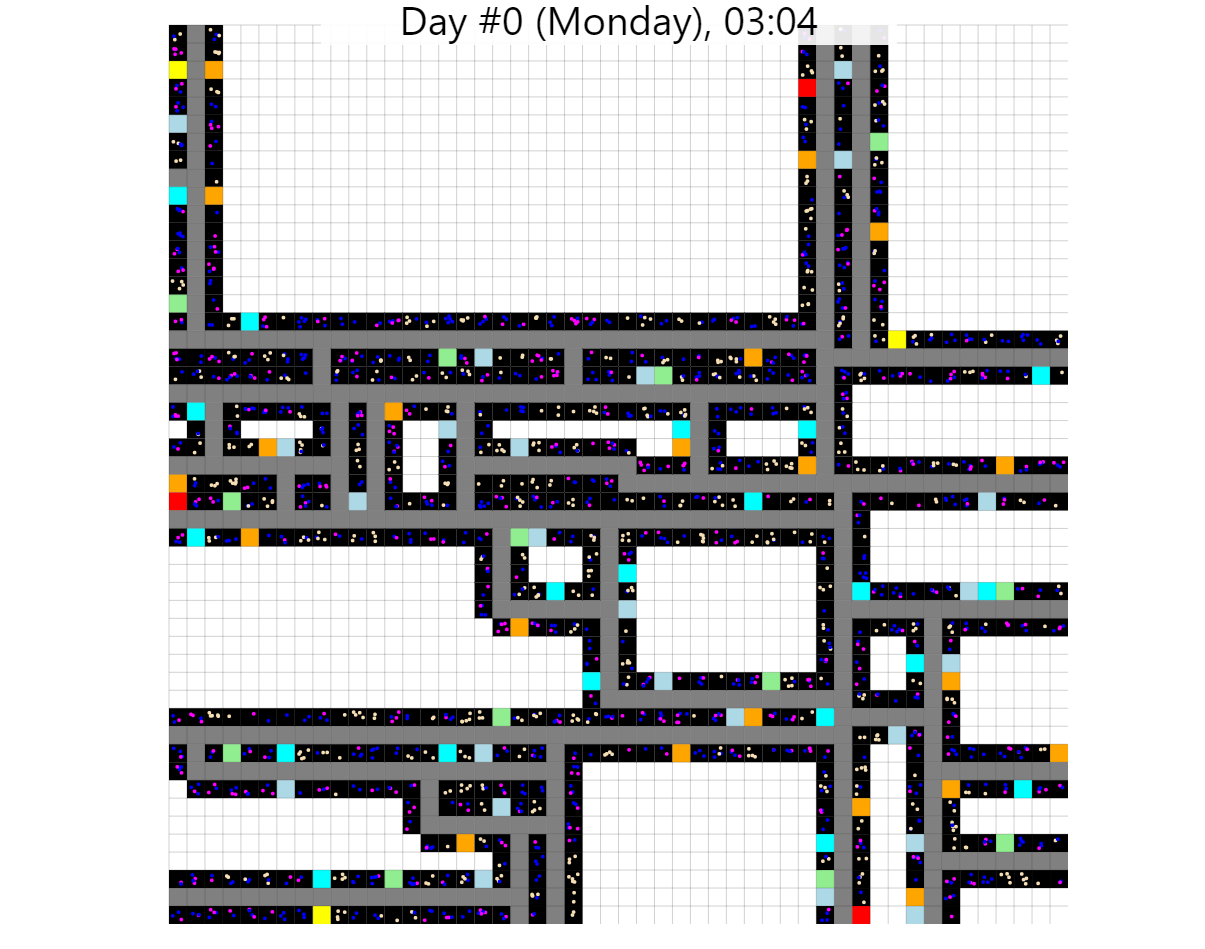 A simulation of the spread of a virus inside a city with inhabitants with realistic behaviors, on which you can act to prevent the virus from spreading too much to learn how to better handle outbreaks