There is a demand for a supermarket crowd tracker to better optimize shopping time and better disperse supermarket users along the opening hours in order to reduce waiting time and contagion risk. Inspired by google community mobility report https://www.blog.google/technology/health/covid-19-community-mobility-reports that provided insights into what has changed in response to policies aimed at beating the propagation of COVID-19 by showing trends over time by geography, across different categories of places such as retail and recreation, groceries and pharmacies.

Our website " ShopSafely " models the occupancy of the supermarkets using the analysis of Swiss telecom companies aggregated location data in compliance with the swiss law on data confidentiality and protection. In a period where social distancing is needed this application will allow us to do it in an effective way especially for the post quarantine period.  This application will allow users to monitor the movement of the people going to the stores and gives better recommendation to optimize the reduction of affluence in the stores

As a small experiment, we used Swisscom's insights tool to generate predictions on the affluences in the supermarkets of two different shopping malls in Crissier and Ecublens

How we are building it

We will first provide a proof of concept using randomized data simulating peoples visits to local supermarkets ( inspired by Google Popular Now feature ) and by showing people the closest “available”* shop to them. The goal is also to have a dummy heatmap with manually generated data deployed on a platform built with common web development tools.  *available : we define a shop as available when it is not near full capacity. During this pandemic period many supermarkets adapted a queue system where each shop had a specific capacity and people coming after that would have to wait in a queue.

Find a mathematical model to accurately represent the movement of the users.  Leverage the data collected from the users. Motivate swiss telecom companies to provide us access to anonymized location data

For a given position in the space we would like to estimate the probability to go to each store. We model the store as a gaussian distribution centered in its coordinates and with a variance depending on the density occupation of the store. Indeed, the further the store is empty the bigger we need the variance to be. Having these prior distributions we obtain the position of the user and we compute the maximum likelihood estimator of the posterior distribution which gives us the store to select.

What have we already implemented?

By taking  the daily distribution of the telecom, we aimed to simulate realistic data by taking the average daily attendance and adding noise to it to randomize it. In the simulation we took a population of 50000 customers and 10 stores. We assigned to each customer its closest store and a time to go there based on the store density.  We assigned a surface to each store proportional to its assigned customers and a threshold (delta_0) that defines the risk of contagion if exceeded. We run a first simulation with no interference then a second simulation where we try to reallocate the customers in overcrowded stores to other emptier stores. We found in the result a significant decrease in the overall exceeding capacities in both time intervals and stores (Result in figures). The final result: 81.44% decrease in overall exceeding capacity

We tried to use three weeks of swisscom insights timeseries data to make forecasts on the occupancy of two supermarkets as a feature-experimentation.

As a first approach, we tried few forecasting models on the data and moved a bit forward with a variation of the ARIMA model which gave us non accurate results.

PICTURE 2 and 3 : The model was able to predict the affluence of the next day (30-Mar) since it had seen 21 days already but wasn’t able to predict more than that correctly 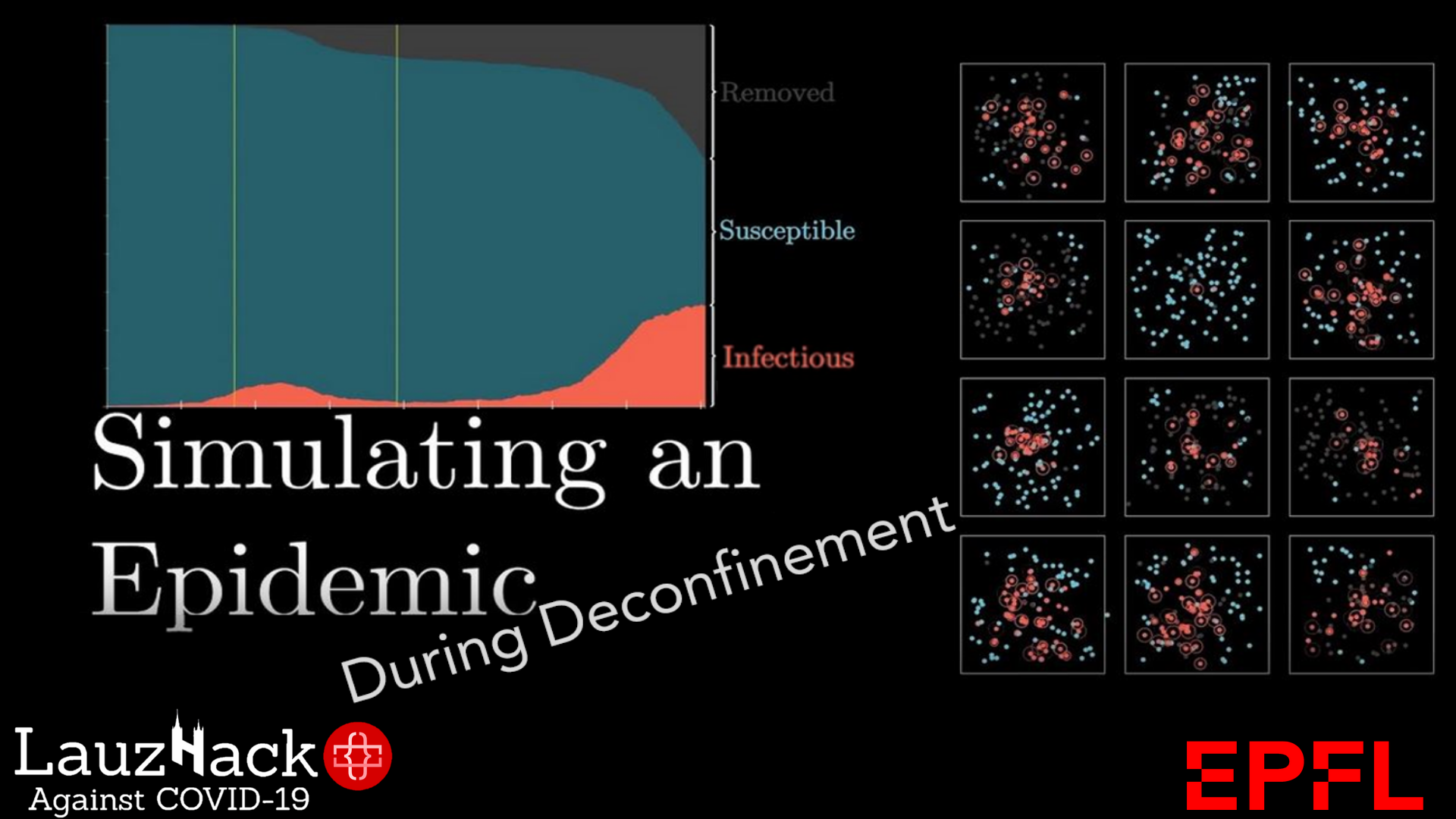 Inspired by the video of 3Blue1Brown (https://www.youtube.com/watch?v=gxAaO2rsdIs) we would like to reuse these simulations to investigate the effect of various deconfinement strategies.