In 2018, The Centers for Disease Control and Prevention (CDC), USA evaluated the readiness to respond to future pandemics, in comparison to the 1918 Spanish Influenza Pandemic. It highlighted that a century worth of advances in influenza surveillance through WHO network laboratories, rapid diagnostics, vaccination programmes and antiviral treatment in addition to improvement of government and health care systems, may not be sufficient to control a large across all continents except Antarctica. The rapid global spread of the infection has led to an acute strain on the healthcare infrastructure resulting in a shortage of healthcare equipment and overburdening of an already3 scale pandemic. infection and the associated coronavirus disease 2019 (COVID-19) has vindicated their assessment and has assumed pandemic proportions affecting individuals in over 190 countries 2 The severe acute respiratory syndrome coronavirus 2 (SARS-CoV-2) overworked healthcare workforce. developing countries exposing the fragile healthcare ecosystems in these countries. Public health measures are currently focused on ‘flattening the curve’ to ease the acute stress on healthcare systems and as such the terms ‘flatten the curve’ and ‘herd immunity’ has become widely used amongst the general population. User interface (UI) experts are creating graphical depictions of the impact of the different strategies employed by various countries across the world on the spread of virus within their respective communities. While the World Health Organization (WHO) has advocated for extensive testing to identify and isolate infected individuals, the large population that needs screening has led to a rapid depletion of test kits. Fluid testing criteria with the lack of widespread testing leads to an under detection and reporting of infected individuals thus underestimating the true extent of spread The situation is compounded in under-developed and of infection in the community while also leading to the failure of small-scale isolation strategies thereby necessitating nationwide shutdowns. Accordingly, community mitigation measures practiced during outbreaks in the 20th Century, now rephrased social distancing and lockdowns have become the norm in most countries as we write this article. Such lockdowns, however, have adverse economic and social consequences, both in the short and long term leading to continued efforts to refine the pandemic response strategies. Given these limitations of currently employed strategies, there is a need to harness technology further to enable the identification of infected and potential hotspots of case clusters (infected asymptomatic and mildly symptomatic individuals). This can result in direct smaller scale 'mass' isolation which would be a lesser strain on the economic and social health of countries. With this in mind, countries like China and South Korea have adopted stringent surveillance measures which though useful in such emergencies are associated with a significant breach of privacy with the potential for long term misuse. Crowdsourced surveillance systems involving the active participation of the general population with self-reporting of health and disease are an attractive option in such scenarios and have been used with some merit in previous disease 4 Back in 1854, John Snow, an English physician meticulously mapped the cluster of cholera cases centred around a hand pump in Broad (now Broadwick) Street, London and proved waterborne transmission of the disease. (Figure 1 a) He used government death-registration data and house-to-house enquiries to map the victims’ residences, showing their proximity to 5  outbreaks. the pump. Global Positioning System (GPS), Geographic Information system (GIS), Artificial Intelligence and Big Data technologies, we haven’t been able to generate regional maps with Today 166 years later, with widespread internet access, smartphones equipped with

such fine details of case to case transmission for the Covid-19 pandemic. Real-time tracking of infectious diseases, though challenging is still not a priority in most countries, and the potential of crowdsourcing technologies are yet to be tapped. One handy dashboard developed by the Johns Hopkins University, Baltimore, has been providing the world with valuable statistics primarily reported by government bodies across the globe. Though extremely useful at communicating the global pandemic, limitations described above restrict the utility of data generated from such a resource particularly with the scaling down of screening tests. However, these dashboards provide little information on regional distribution within communities. Having closely monitored this space over the last two months, we as health professionals conceptualized and created a crowdsourced symptom tracker to capture and map individual data points on a map with the granularity of a ZIP code. Users self-report the presence or absence of common symptoms associated with the SARS-CoV-2 infection and probable exposure to a SARS-CoV-2 positive patient in addition to demographics which include age, sex and ZIP code. An email address is optional to receive updates. Further, we also scan the internet and open-source Covid-19 databases for ZIP codes or location of tested and confirmed positive and quarantined cases. In populous countries, field workers can provide valuable real- time data to halt transmission in nascent stages. Finally, we layer all this data, using the latitude and longitude, on a world map, which is free and accessible to all. (Figure 1 b) By layering both crowdsourced symptom data and confirmed positive cases, case to case transmission can be established. We chose ZIP / Postal code as the identifier to map individuals as this is the most consistent addressograph that can be obtained. However, the average area covered by a ZIP code varies from 10 square miles in the United Kingdom (UK) to 90 square miles in the United States of America (USA), making these systems more effective in the UK.

Such crowdsourced information helps identify hot spots, distribution of potentially infected individuals. It provides trends of affected people in a given city which can be used by public health organizations to focus preventive, isolation and treatment efforts towards containment of illness thus enabling governments to open up communities in a controlled fashion, minimizing economic damage. Poor engagement will be the most significant limiting factor, of such crowdsourced platforms which have excellent potential as surveillance tools in this digital era. Although these systems may not elicit a good response from the general population during seasonal influenza outbreaks, the magnitude of the Covid-19 pandemic and the consequences of containment measures employed so far would make it socially more acceptable. Local governments will need to play an essential role in strengthening such a system and advising their citizens accordingly. Another limitation of this system would be the misreporting of information which would lead to misinterpretation of cases. Users will be skeptical about privacy, data protection, compliance, and safeguarding these will be the highest priority. Our system does not capture any identifiable personal information which can be traced back to the user. We hope this rapidly prototyped, lean application, developed in lines with the startup culture of the Silicon Valley, will at least alleviate if not solve some problems during the grim times of the SARS-CoV-2 pandemic. Active participation from public health units across the world in sharing data and implementing out of the box technologies will yield results in geofencing the SARS-CoV-2 infection. The crowdsourced platform can be accessed at www.trackcovid-19.org. 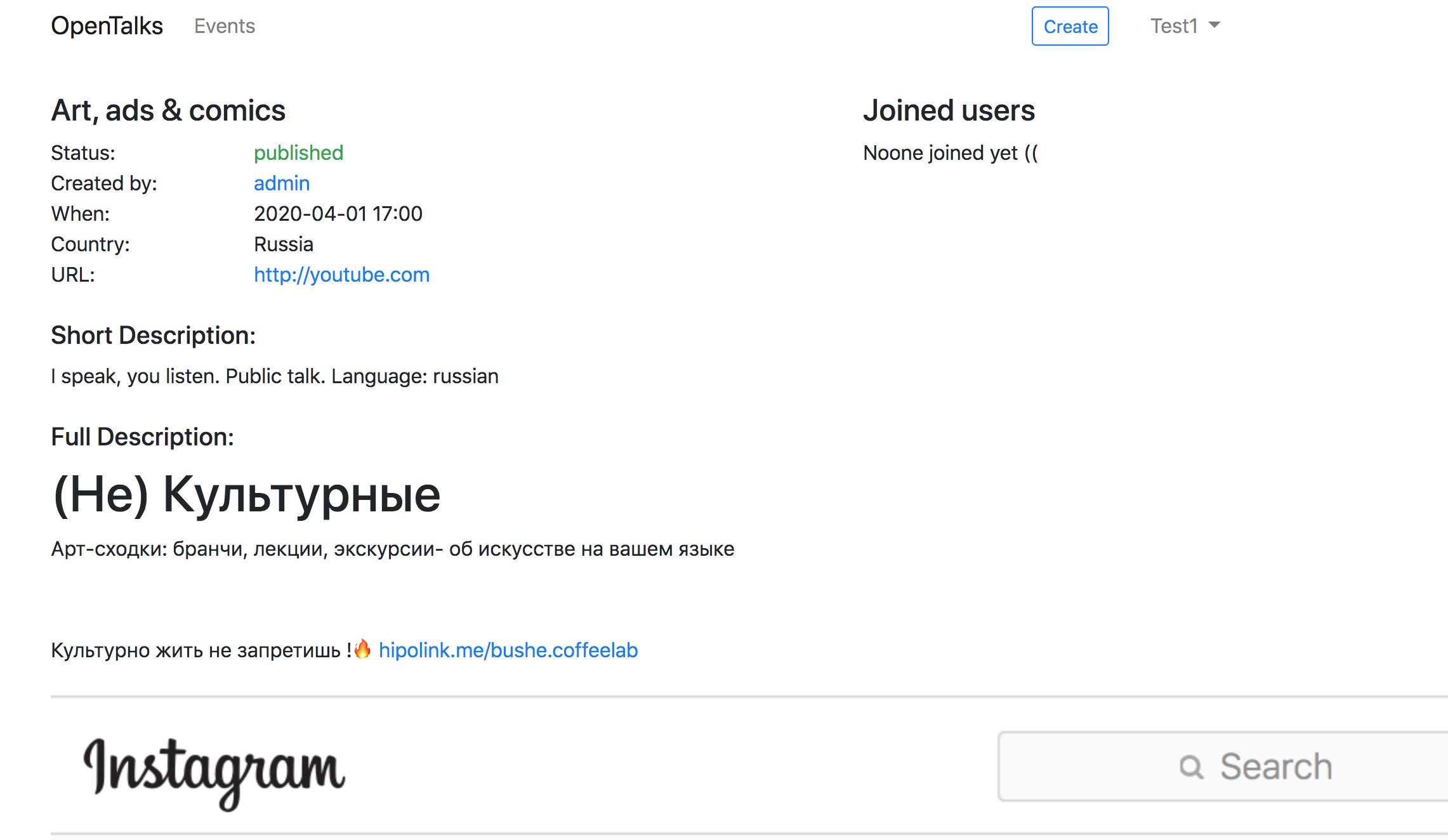 A platform that helps people spend time alone. Here you will find friends from all over the world who are ready to talk on various topics: "Online Pub", "Psychological assistance" or "Play Kahoot.it" 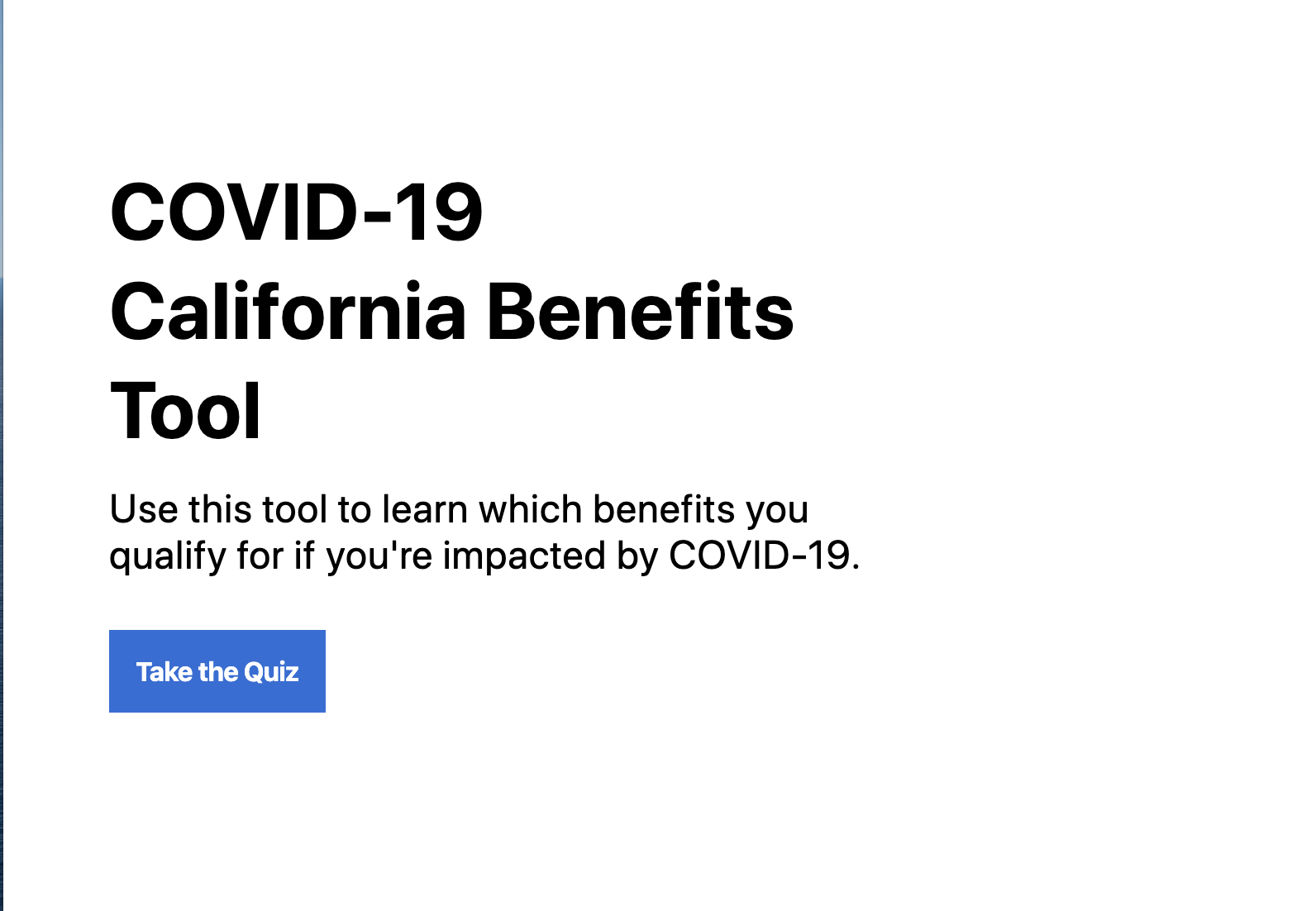 Use this tool you discover which government benefits you're eligible for if you have been impacted by COVID-19.